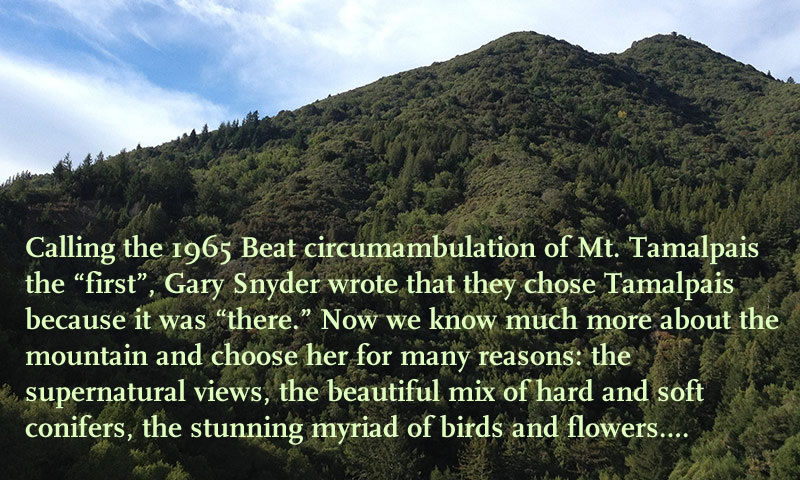 Mapping the mountain for the California Geological Survey in 1862, William H. Brewer wrote, “It was most grand, more like some views of the Alps than anything I have seen before – those glimpses of the landscape beneath…foggy curtains.”

In 1862 Edward Rowland Sill camped on Tamalpais and wrote the long poem “The Hermitage” which was largely inspired by the mountain:

See: I am come to live alone with thee.
But I come with my life almost untried.
Teach me thy wisdom; let me learn the flowers,
And know the rocks and trees.

In 1867 Charles Warren Stoddard’s first book of poems included one about Tamalpais:

Broad banners of mist thread through the gate,
And gather about him cold as a shroud;
But little he cares, for his bare hoary pate
Is capped with the sunlight over the cloud.
Brave Tamalpais! He looks so grand,
Bluffing the oceans off, guarding the land.

In her circa 1871 poem “California” the pioneering Ina Coolbrith wrote:

Was it wind, or the soft sigh of leaves,
Or sound of singing waters? Lo, I looked
And saw the silvery ripples of the brook,
The fruit upon the hills, the waving trees,
And mellow fields of harvest; saw the Gate
Burn in the sunset; the thin thread of mist
Creep white across the Saucelito hills;
Till the day darkened down the ocean rim,
The sunset purple slipped from Tamalpais.
And bay and sky were bright with sudden stars.

…. As I came down Mount Tamalpais,
To West Heaven’s gateway opened wide,
And through it, freighted with day-cares,
The cloud-ships floated with the tide;
Then silently through still air,
Starlight flew down from Paradise,
Folded her silver wings and slept
Upon the slopes of Tamalpais.

In Amateur Immigrant Robert Louis Stevenson wrote, “A spot of cloudy gold lit first upon the head of Tamalpais, and then widened downward on its shapely shoulder; the air seemed to awaken, and began to sparkle; and suddenly ‘The tall hills Titan discovered,’ and the city of San Francisco, and the bay of gold and corn, were lit from end to end with summer daylight.” From Silverado Squatters: “More of the bay became apparent, and soon the blue peak of Tamalpais rose above the green level of the island opposite…. For Tamalpais stands sentry, like a lighthouse, over the Golden Gate, between the bay and the open ocean, and looks down indifferently on both.”

“There is Tamalpais, the one and only Tamalpais, which should be ascended by the traveler if he has only a single clear day in the city of the Golden Gate.” Our whole party went up to it on the day after our arrival, and we were agreed that in all our wanderings we had never had a more glorious experience.”

North Beach Alba
Waking half-drunk in a strange pad
Making it out to the cool gray
San Francisco dawn –
White gulls over white houses
Fog down to the bay
Tamalpais a fresh green hill in the new sun….

Praises Gentle Tamalpais
Perfect in Wisdom and Beauty of the
sweetest water
and the soaring birds.

Gentle Goddess
Who never asks for anything at all,
And gives us everything we have,
Thank you for this sweet water,
And your fragrance

In The Dharma Bums (1958) Kerouac hiked on Mount Tamalpais for two days with his friend Japhy Ryder who remarked, “See up there ahead, as beautiful a mountain as you’ll see anything in the world, a beautiful shape to it. I really love Tamalpais. We’ll sleep tonight around the back side of it.”

This is the last place. There is nowhere else to go.
This is why
Once again we celebrate the
Headland’s huge, cairn-studded, fall
Into the sea….

For we have walked the jeweled beaches
At the feet of the final cliffs
Of all Man’s wanderings…. 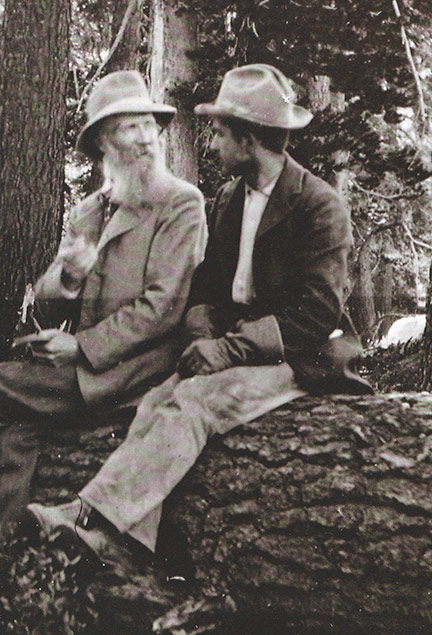 The whole Tamalpais region is delightful and many times more interesting and instructive than is generally known by those living within an hour or two of it.